Lake Worth Beach bridge a perfect canvas for renowned artist 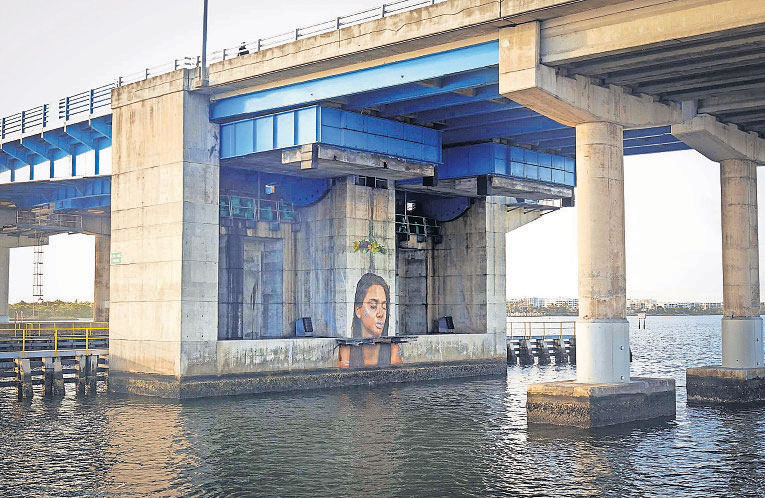 LAKE WORTH BEACH — If you take a walk on the bridge that stretches into Lake Worth Beach, you can see a girl beneath the span. A flower crown hovers above her head, her eyes look at no one and her brown hair dips into the water that laps against the wall she’s painted on.

She is the focal point of a mural painted by Hawaiian native Sean Yoro in 2017 during the Canvas Art Festival.

Yoro’s art is well known on social media and can be found all over the world.

He had an interest in art when he was a teen, but it wasn’t until his early 20s that he decided to begin his artistic creations.

“I started pursuing art when I was 20 years old, but didn’t get into the street-art world and outdoor projects until I was 25,” said Yoro.

His street art and outdoor projects range from portraits of women to close-ups, such as an eye peeking through the greenery that grows around it on a wall. Many of his projects blend nature and humans together, creating serene and surreal pieces. The naturalistic aspect and documentation of his work is made possible with the help of his twin brother, Kapu.

“He has always been into photography and design work, so it was natural to work together from the very beginning of my art projects. Because murals were always in remote locations, it was vital to have Kapu along, documenting the journey and final artworks,” Yoro explained.

Yoro has completed more than 50 murals, and the environment varies for each one. Many are found on walls, some known bet ter than others — a few are found in remote locations in which a small boat or paddle board was required. One was even completed in the ice caves of Switzerland. For his most recent project,he completed three murals underwater as part of his freediving reef series titled “Deep Seads.”. It took over a year to complete the project.

His inspiration for the mural under the Lake Worth Beach bridge was the city itself.

“It was such a unique place with many different cultures and people, Lake Worth (Beach) reminded me of Hawaii with the melting pot of a community. I wanted to create a piece that represented the peacefulness of the water and the overall nature of the place,” said Yoro.

What most people don’t know about the painting is its name and meaning.

“I titled this piece ‘Uhane’ which means spirit in Hawaiian,” he said.

Does he plan to return to Florida for another mural project? “It is possible, we have a few opportunities that may work out to be down there again. I am always open to the idea, as I love the state and there are so many new places to discover,” he said.

It’s difficult for Yoro to name a favorite piece of his own art, but he mentioned that his “Deep Seads” series has become notable for him. Yoro doesn’t plan too far ahead on his artistic journey; instead he focuses on following his passion and finding new ways to create artwork, each with its own unique story.

Read the entire article on PalmBeachPost.com